in a Boogie Trance!

A cover of Buddy Guy's
​"A Man Of Many Words"

Check out a fun conversation I had earlier this summer with my good friend Stephen Hatch from Hatch Family Chocolates out of Salt Lake City!

By the way, We’ll be back in Salt Lake on Friday night!!

Not only does Stephen Hatch make some of the most delicious chocolates in the world he also is one of the most heart felt people I’ve ever ran acrossed! (oh, and I wrote and produced the theme song for the show!!)
​
Spread love,
Kris Lager

I just posted a new song on www.patreon.com/krislager! It's a live version of I Got The Devil and here's what I got to say about it:
This one is an interesting one for me, friends...

I'm in a nostalgic mindset these past few days. Mainly because of some big changes that have been forced upon me and the band... Changes that at this moment now seem inevitable and a long time coming. I'm not gonna lie, It's been a rough week for me personally and it's the music and some good friends that have helped me get through and inspire me to keep going.
So, the other night after our show at Big Rock Candy Mountain I opened up KLB's last live recording on my computer. A recording from The Rybin's Lake Party where we played on Sept. 11th. And when 'I Got The Devil' came out of my headphones I knew this was gonna be the next 'Patreon Exclusive Song'. The timing, the cathartic feeling of playing & hearing this song again, and the performance itself made me want to share this with you.

As for this song: I wrote this in my early 20's when I probably partied too hard and I didn't realize the consequences of my actions. Spiritually, I could feel the damage. I knew right and wrong, but for some reason I would (and still to this day) go astray. Our spirits are tricky things aren't they. We just want to feel good. We just want everything to be okay. So much so that we'll do almost anything to chase away the ghosts and the demons that haunt us.

The booze, the drugs, and the sex doesn't make the devil disappear. In fact more often than not it only gives life to and feeds this beast living inside all of us. It's just waiting for us to feed it...
One of my favorite stories about 'The Devil':

It was 2016 and we were playing at The Chautauqua Hills Blues Festival. When we got done with our 'Feel Good/ Celebrate Life/ Spiritual Revival' type of show that we like to do an amazing blues harmonica player followed us. His name is Jason Ricci and if you haven't heard him play the harmonica you should check him out. He's phenomenal, and if you have you know what I'm talking about.

Right out of the gate almost immediately upon hitting the stage he said something to the effect of 'I ain't about all that hippie dippy, feel good, happy crap. I play music about hookers, drugs, and the devil. Then proceeded to play a ripping harmonica driven blues groove.
I thought it was hilarious on many levels because it was definitely a switch up in vibes and it was palpable. So, to address this difference was funny to me and the fact that it made such an impression on him was even funnier. (In fact, when we played with ZZ Top even Billy Gibbons made reference to this same difference between our vibes and them playing 'the devil's music'.)

So, I'm standing backstage next to our bassist Tom Murnan (Tommy 3D) and after Jason said the comment about playing music about hookers, drugs, and the devil I lean over to Tom and say, 'What is the Devil?'

and this is my favorite part of the story: Tom leans over to me and says:

Has 8 blues classics and 2 originals all recorded live to tape... .A beautiful addition to any music lovers collection!

Andy Frasco is one of my favorite people and one of the most creative dudes in the business.
He’s always delivering something for his fans and friends!
I’m featured on the Aug. 24th show with Son Little. I dialed it in a few days ago and listened for myself. It was a fun conversation!
Just a couple of old friends reminiscing, story telling, and waxing poetic about music and life.
I think you’ll dig it… check it out!
https://goo.gl/HjBAMw
​-Kris 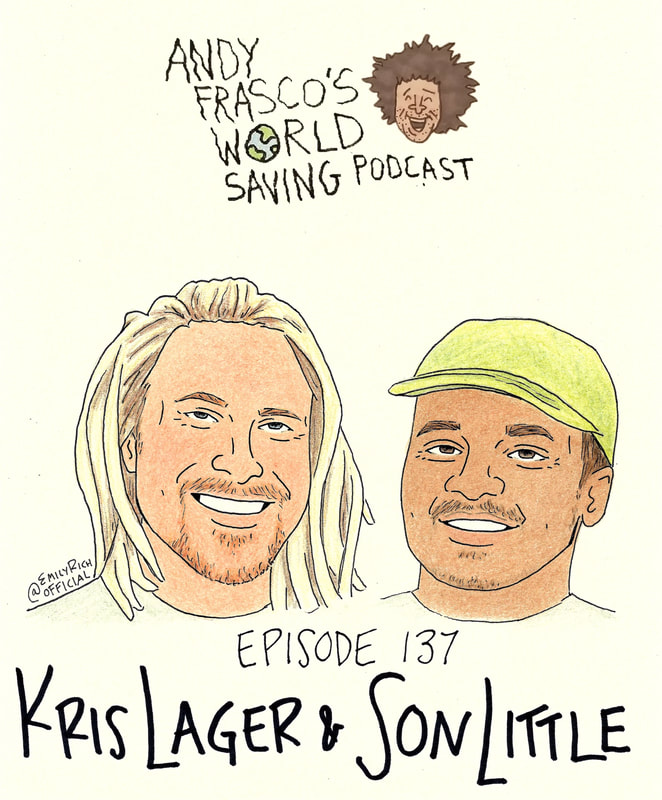 Hey Friends,
If you are looking for a great way to support our creative endeavors there is few better ways than to sign up to our Patreon page at: www.patreon.com/krislager and become a member.

You're support is what keeps us going. So, thank you and much love!  -Kris Lager
​

the last tour before things got weirder....

'Plugged In and Turned On' from KLB's 2019 Release: Spectrum

​The recording is an emotional statement from an artist better known for jamming, looking at the bright side, and promoting a "celebrate life" mantra. Lager tackles challenges such as touring while being married with children, and dealing with the death

of his father, turning his emotions into memorable musical statements. "Love Songs & Life Lines" also taps into Lager's Americana side as he channels his love for people and music and explores topics such as purpose and mortality. The album was mixed by legendary producer Jim Gaines, known for his work with Stevie Ray Vaughan, Santana, Steve Miller,

Van Morrison and others.

The same guitar picks Kris uses. Check them out for yourself!

Live at The Bourbon Theatre CD

$9.99
A Funky, soulful, and energetic live performance captured on Halloween night 2013 at The Bourbon Theatre in Lincoln, Nebraska!

$9.99
Overall a feel good and laid back album recorded and produced by Grammy nominated musical giant Tab Benoit. At his Whiskey Bayou Studios in Louisiana April 2012. Kris shows his country leanings and romantic side in a lot of Platte River Runaway's tracks.

$9.99
KLB's fantastic 2010 release. A lot of folks favorite to date. Recorded at Lincoln's Sadson Studios. This is definitely one to pick up for your collection!!
Shop

The new release entitled Spectrum runs the gamut of styles and emotions. It's a mix of Funk, and feel good jams, Emotional statements, bluesy grooves, and heart tugging slow burners. Exactly what you've come to expect from your favorite band of jammin' hippies.

Recorded at world famous Catamount Recording in Cedar Falls, IA. Mixed by legendary producer, Jim Gaines. This is another much needed compact disc for your collection.

Click Here to Preview all of the tracks off of Spectrum. KLB's Newest Recording!